The Cost of Rework in Construction (and How to Avoid It) 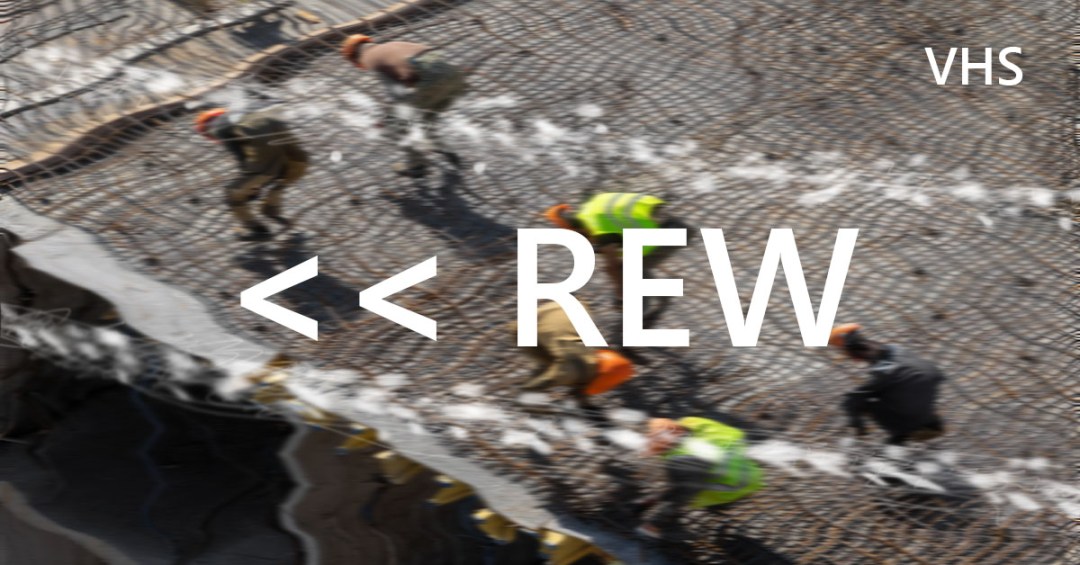 What is Construction Rework?

Construction rework is any unplanned construction work that is required to be done as a direct result of mistakes or missteps that were taken on a project site or throughout the planning process. Rework activity can be characterized as the deconstruction of existing work so that remedial steps can be taken.

Construction rework is unnecessary, costly, time consuming, and quite frankly, frustrating as h*ll.

Before we explore the causes of rework in construction and how to calculate rework cost on your projects, let us explore some of the leading statistics surrounding rework:

So, if we sum this all up, what does it mean? It means that there is still a lot of work to do to improve the effectiveness of the design phase in construction as well as document management and transfer between various project stakeholders. It also suggests that when it comes to the construction phase of the project, that many rework activities are the result of miscommunication or a failure to communicate at all.

The Causes of Rework in Construction

Rework activities can be triggered by a variety of missteps on construction sites. That being said, there are some causes that account for a disproportionate amount of rework.

The top-four causes of construction rework are: 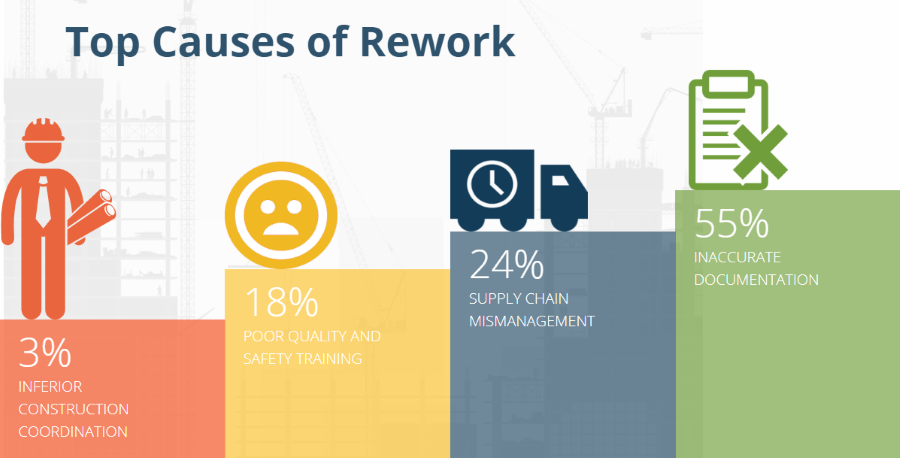 Let’s explore each of these leading contributors in greater detail.

Though this pool is the smallest of the rework’s “big four,” on-site coordination can still be a challenge for many construction firms and a contributing factor to rework activities.

The larger the construction projects, the larger volume of stakeholders that need to communicate and share valuable information with each other. Without effective formal communication processes in-place, the right mediums, and construction technology, information can be lost along the way, leading to mistakes that drive rework activities.

That is why new worker onboarding processes need to provide deep training on both quality and safety expectations on the project.

An age-old problem in the construction sector is procuring supplies at just the right time and minimizing the impact of incorrect orders or supplies. Most construction sites aren’t rich in space for material storage, so everything needs to be procured just-in-time to drive efficiency and reduce waste.

Failure to do so can lead to unnecessary idle time when workers are unable to perform their work due to the unavailability of supplies. It can also lead to rework activities if project timelines are impacted or if work is done out of order.

Construction projects are rich in inaccurate documentation, but that doesn’t have to be the case. Read on to discover a formula to help you understand what exactly these rework activities are costing you and how you can take aim at reducing their impact on your projects.

How to Calculate the Cost of Rework in Construction

Rework is a costly construction activity. Be it financial burden, lost time, or simply worker frustrations—rework manifests itself in numerous ways on construction sites.

Based on that data, calculating rework costs is simple:

Conservative estimate (on a $10 million project):

Liberal estimate (on a $10 million project):

It is staggering to consider that on a $10 million project, $900,000 of the contract value might be spent on rework activities. Now that we know the costs of rework in construction, let’s explore proven strategies to avoid and prevent it.

How to Avoid Rework in Construction

Just because the industry spends roughly 5-9% of contract value on rework activities, doesn’t mean that your firm needs to do the same. There are four proven strategies that can drastically reduce the impact of construction rework, and we are going to explore each of them in detail, as well as the causes of rework that they each mitigate.

When one of the greatest drivers of rework activities is the inaccurate delivery of data and documentation, implementing construction technology to digitize and standardize the document transfer process should be a no-brainer.

Autodesk’s BIM 360 is one of the best ways to mitigate the risk of construction rework that stems from design coordination. This technology enables construction firms to digitize architectural and engineering renderings, make them accessible by various project stakeholders, grant certain parties the ability to make changes, manage supply of inputs, virtualize some (or all) of a build, and much more. 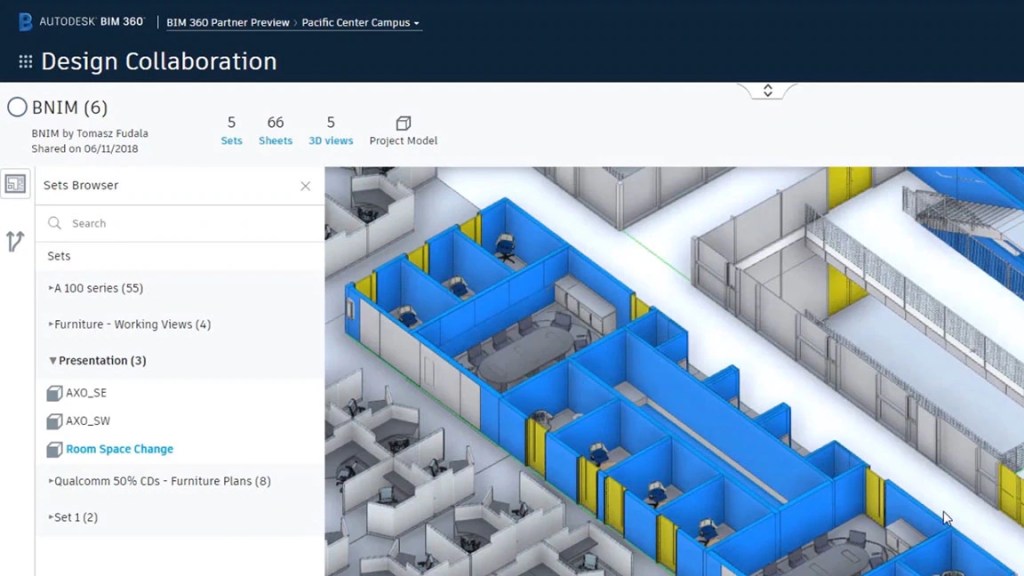 myComply’s Projects Pro helps contractors to address more project-based documentation while also improving quality and safety training on projects. The Orientations module makes it possible to digitize new worker onboarding and improve the quality of training delivered by standardizing communications throughout the duration of projects. The Projects functionality makes it easy to secure the transfer of critical documentation, such as contracts, and manage that documentation in-platform.

Thoroughly vetting all the subcontractors that you hire to contribute to your construction project is critical if you want to minimize the amount of rework that stems for trade-specific mistakes, inexperience, and more.

Here are some of the qualification parameters you should use to vet potential trade partners:

3. Improve Communications in the Field

Here are the steps that you need to take to improve your in-field communications:

As a general contractor with a reputation to maintain, construction quality must be a priority. Quality work also prevents the need for rework triggered by deficient or inefficient attention to detail.

Ensure quality of work on projects by:

Rework does not have to be (and should not be) accepted as 5-9% cost on your construction projects. This article explores the leading causes of rework, frames the importance of risk aversion tactics, then provides four proven tactics that will take direct aim at reducing rework in construction projects.

As highlighted above, myComply is one of the leading technologies for taking a proactive and preventative stance towards construction rework. myComply gives general contractors the power of a digital onboarding platform (to enhance training on quality standards) and a workforce management platform that unlocks the ability to transfer documents to/from subcontractors, collect worker certifications digitally, facilitate certification-based access control (to ensure that every worker is qualified to be conducting work on the project), and automate the collection of time and attendance data.

If you are interested in finding out more, then book some time with a product expert today to explore the leading construction workforce management platform for general contractors.